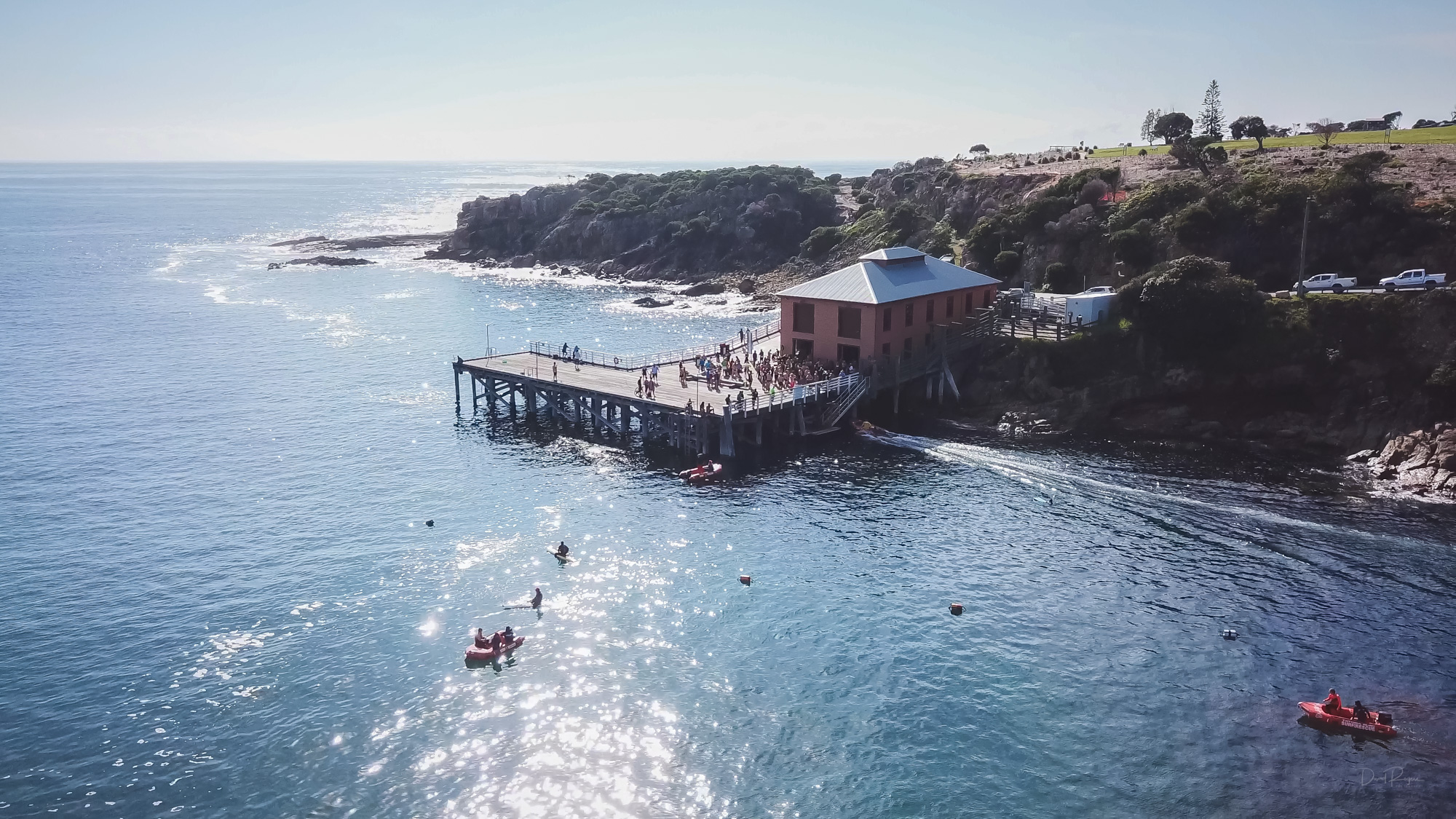 Each year since 2002, over 400 people jump into the crystal blue and sometimes icy cold water of Tathra from the historic Tathra Wharf and swim the 600m or 1200m course (or both) of the Tathra Wharf to Waves Ocean Swim.

Over the years, Wharf to Waves has grown and is now a premier event on the Far South Coast calendar every January. The swim claims centre stage of a weekend of fun and fitness in Tathra, which has in the past included a market stall, a skate, blade and bike competition, a 2km Beach Fun Run and the Bega to the Beach Bike Ride.

The Tathra Wharf to Waves Ocean Swim came about in 2001 when parents of the Tathra Preschool community were thinking of a fundraising venture which would pull in funds from outside the local community and be sustainable for the future.

The Tathra Surf Club and the local preschool (like many other sporting clubs and services) are reliant on fundraising to keep afloat and it has always been a problem that most local organisations need to seek assistance from the same businesses and wallets each year.  A few members of the club and some locals did regularly complete the swim from the surf club to the wharf but as long line shark fishing from the wharf had only relatively recently ceased (1997) swimming in the deep waters of the Tathra Wharf, where sting rays and all manner of sea creatures reside, into the beach remained, for the majority, an unfeasible feat.

Ocean swimming events enable people to swim in the ocean supported by volunteers who can supervise swimmers and ensure their safety.

The success story of the Lorne Pier to Pub, which began with an informal challenge among Lorne Surf Life Saving Club members diving in to the sea from the pier and swimming a course through the bay, finishing by bodysurfing the waves onto the Lorne foreshore. The swimmers would then celebrate their success at the Lorne Pub. The event now attracts 4000 swimmers a year! Could it be done in Tathra?

Luckily we have a very obliging community and great volunteers and an organising committee was formed.

The first Tathra Wharf to Waves

The first Tathra Wharf to Waves event took about a year to organise. One of the major issues for the inaugural event was how to get competitors into the water from the Tathra Wharf.

Local Engineer Andrew Marshman donated his services to design a removable wooden platform and stairs – which has recently been replaced with a modern metal equivalent.

After Surf Lifesaving Australia approved the event as a Special Event and approval from the Bega Valley Shire Council, Police and NSW Water Ways was secured, the organisers sought sponsorship and ticked the other necessary boxes to host the inaugural Tathra Wharf to Waves on 27 January 2002.

Thanks to the unwavering efforts of organisers and volunteers, the event continues to grow and take greater numbers of entrants each year.

For the past six years our major sponsors have been Bega Cheese and Envirokey whose generous sponsorship helps offset the cost of running the event.

In 2007 enormous ocean swell forced the event from the ocean to the river at Mogareeka at late notice. Competitors enjoyed the unique experience of the warm, still waters of the river.

In 2008 as part of their warm up to the Olympics the Korean Triathlon team competed in the swim. Although veteran ocean swimmer and inaugural 1200m Splash for Cash winner John Fox lead the 1200m race all the way, Korean Seok Kim Ju’s superior fitness enabled him to gain speed on the run up the beach to just pip John at the post!

In 2009 the NSW Governor General, Professor Maree Bashir addressed the crowd on the morning of the swim commenting on the Australian Spirit the event embodies, congratulating organisers, volunteers and competitors and then stayed to start the first 600m event. In that year John Fox won the 1200m for the second time, 7 years after his first win and after turning forty.

In 2011, Tathra Wharf to Waves celebrated ten years since hosting the inaugural ocean swim in 2002. As part of the 10th Anniversary celebrations, the Squidgy Club was formed. The prestige and esteem of completing ten Tathra Wharf to Waves Ocean Swims was the goal of many of the original competitors.

2011 was also the year that one of the founding members, Lisa Freedman, stepped down from the Tathra Wharf to Waves Committee, after ten years of dedication to this event. [Lisa Freedman, Barry Grant, Leanne Cochrane, Tony McCabe, Alan Robson, Sonia Ellis and Rob White, formed the first committee as a sub-committee of the Tathra SLSC.]

In 2015, after years of tireless efforts for the community in running this event, the Tathra W2Ws Committee  of (see pic below – left to right) Therese Wheatley, Ann Maree Carroll, Linda-Badewitz Dodd and Leanne Cochrane, decided it was time for a new team to take up the reigns. At the time of stepping down, the Committee had raised and distributed over $250,000 to Tathra community organisations since the event’s beginning in 2002.

The Tathra Wharf to Waves event encapsulates fitness, friendly competition and fun – all on one of the most beautiful beaches in Australia. The 600m and 1200m course distances enable swimmers of all age groups to participate. Many families and friends have competitions among themselves and the event has initiated life-long friendships between locals and visitors who return every year to compete.

The Tathra Wharf to Waves Ocean Swim is a major joint fundraiser for both the Tathra Surf Club and the Tathra Preschool. Each January preschool parents, volunteer lifesavers, surf club and community members assist to run a weekend of activities which showcase Tathra and its surrounding environment. All proceeds from the Tathra Wharf to Waves Ocean swim and weekend activities are shared equally between the Tathra Surf Club and Tathra Preschool for improvements to their buildings and purchase of necessary equipment and resources. A donation is also given to the local Tathra Rural Fire Service for their assistance in the Fun Run and bike ride and Clean Energy for Eternity.

Swim which reaches hands across continents

In 2015 Dave Forrest, a Tathra local volunteering on the Africa Mercy hospital ship and had never missed a Wharf to Waves event, created and had officially sanctioned, a swim in Toamasina (the 501 Ocean Trek – 501 is the postcode of the region and the name of a restaurant on the beach) held at the same time as our event. In 2016 he convinced a couple of extra swimmers to become involved and held a swim in Madagascar, where the ship was currently based. Dave, who runs the teaching academy on the Africa Mercy hospital ship said, “Wharf to Waves is more than a just an ocean swim to me. So many people give up so much time to organise the event; it’s an annual celebration of the Tathra community and its beautiful natural environment.”

In 2016 Dave swam both events with an Alaskan swim champion, a Canadian life guard and a triathlete from the UK. Both the 600m and 1200m swims were held in the ocean on the main beach in town. This was seen from the ship so they had spectators on board. In 2015 they had to contend with a cyclone so had to complete one of the swims in the pool, but this year they completed both swims.  Dave said events such as this were markers in his life. “To me this is more significant than New Year’s Eve. It marks the end of one year and the beginning of another.”